The forgotten art of customer obsession 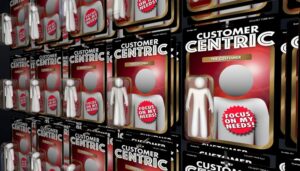 Marketers are increasingly getting stuck in the trap of obsessing about the new, at the cost of obsessing about customers, says Gareth Kay. But, he argues, customer obsession can transform whole industries, as the success of Amazon and Netflix shows.

People who know me, know I’m very easily distracted. I’m a sucker for falling down a Twitter black hole at any given moment. And on one of these black hole expeditions last week, I discovered an interesting Q&A going on about the changing role of CMOs. The question posed: ‘Is the CMO role becoming largely tech-focused?’ A simple question, but, I feel, a rather alarming and misguided one.

It’s not unusual to hear agencies, and other creative companies that advise clients, being accused of having ‘shiny object syndrome’. Of chasing the latest, greatest new thing – the new tech, the new channel, the new technique – and not obsessing about the most effective solution to a problem. We’d happily claim to be the first to project a logo onto the dark side of the moon and not care less that no one on Earth was actually able to see it. But I think that, as deserved as this criticism can often be, clients tend to escape the same critique. And increasingly this looks rather unfair.